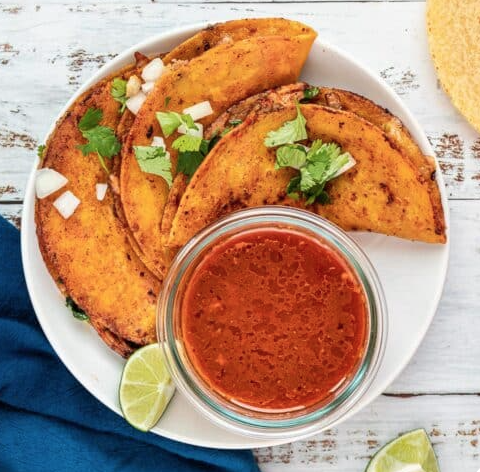 I saw an amazing-looking recipe on TikTok and did a little research to back it up and confirm the quantities. While a lot of recipes online suggest 2 varieties of chilis, he uses 3 – I’m sure his is better.

I went to Harper Foods hoping to find dried chilis but they only had “chilis whole.” After some online research, I believe they’re kashmiri chilis, which are pretty mild. Off to Amazon I go to buy my anchos, guajillos & arbols. They come in a 3-pack so I guess they’re a pretty common combo!

Similarly, the recipes I found called for more oregano and cumin, but didn’t have the variety of spices his calls for.

Saute the onions and garlic in some oil. Add the chiles, tomato & tomato paste and the whole spices. Cover with water or stock and boil for a while.

He then dumps the whole thing into a blender. I think I might fish out the cinnamon stick, bay leaf and cloves first?? Either way, he then adds his powdered spices and blends.

Put the sauce back into your pan and add chunks of chicken breast. Simmer for 45 minutes until the chicken shreds apart.

Some recipes I found serve it at this point as a stew over rice. He builds it into a taco using shredded oaxaca cheese (Mexican goat milk), chopped onions and cilantro, with a squirt of lime and plenty of the sauce ladled in. Which is why I’d take out the hard crunchy stuff before blending it!! 😉