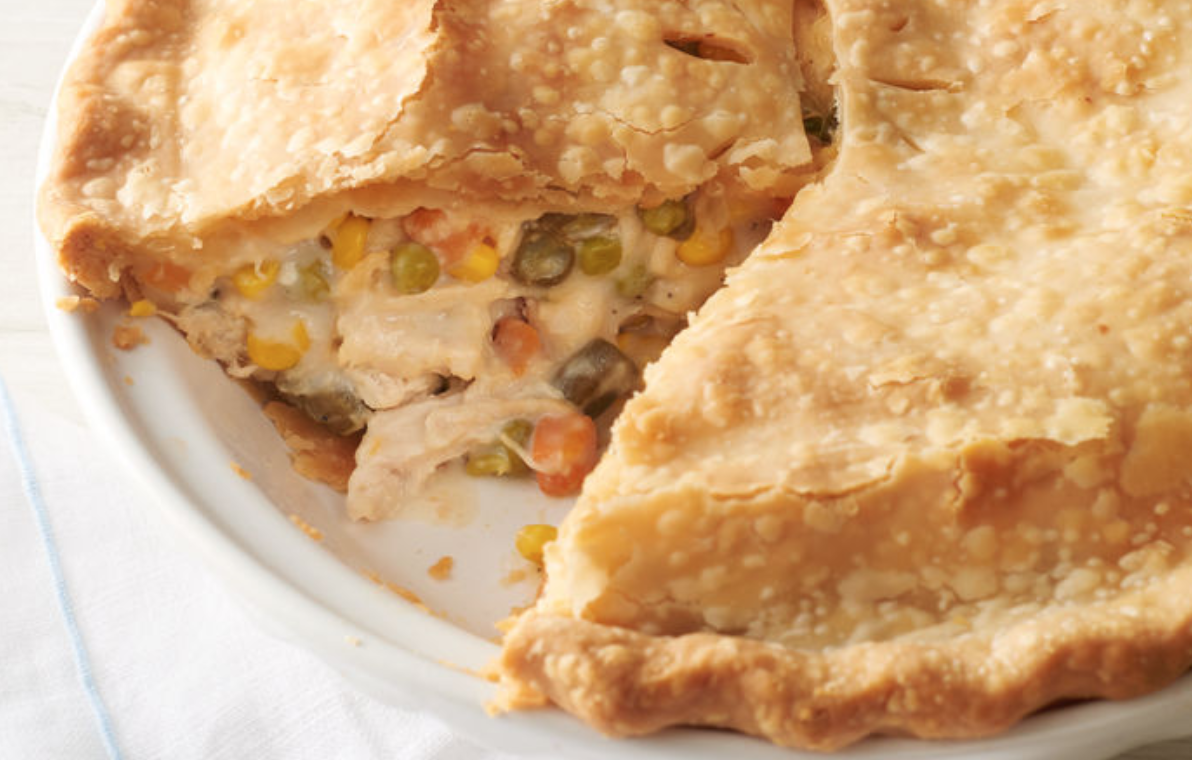 This recipe is straight out of Joy of Cooking. But now that I’ve made it twice, I’ve got a couple cooking tips. Heads up: while this is delicious, it’s also super fussy. You’re making a roux for crying out loud! If you want a quick and easy chicken pot pie, this one is really darn good.

The recipe calls for you to start by poaching the chicken, and it offers the option of poaching boneless skinless breasts in commercial broth (as opposed to a whole chicken and essentially making your own broth). I guess that’s supposed to be a timesaver?? The way I see it, if you’re making chicken pot pie from scratch, your primary motivation isn’t saving time.

But if you’re trying to cook the collagen out of the bones to make your own broth, you have to do the bones and meat separately, or else you’ll end up with rubbery, overcooked meat.

FWIW Joy of Cooking explains that broth is made from meat, while stock is made from bones. So this recipe is technically somewhat of a hybrid between the two. If you wanted to be a purist and make a straight-up stock, you would cook 5 pounds of chicken parts (backs, necks, wings…) in 16 cups of water for 3 hours, flavored with an onion, carrot and celery.

So here’s the process I’ve decided on:

For your broth:
1 whole chicken (or parts), about 3-4 pounds
2 c commercial chicken stock + enough water to cover
onion, celery, carrot and parsley to add to your broth, if the commercial stock isn’t very high quality

Cut up your whole chicken and arrange the parts as flat as you can in your stockpot. Add 2 cups commercial chicken stock, along with as much water as is needed to completely cover the chicken parts. Bring to a boil and simmer for about 15 minutes, skimming off the impurities that rise to the surface.

Turn off the heat and remove everything but the wings to a plate (wing meat is so fatty, it’s almost impossible to overcook). Once the chicken parts are cool enough to handle, remove as much meat as you can. It should be just slightly undercooked. About half of it will go into your pot pie; reserve the rest for some other use. (Like chicken enchiladas? This recipe calls for poaching the chicken in a spiced broth, so you really don’t want it overcooked when you begin!)

Put the bones back in the stockpot and return to a low simmer. If the stock you started with wasn’t very strong tasting, you can beef up your broth with some onion, carrot and celery. If you’ve got parsley, throw that in too. But skip the garlic! It would overpower your pot pie later.

Taste your broth after half an hour. It will almost certainly need salt. Is it nice and chicken-y? Then it’s done. If not, continue to let the bones simmer a while. But keep the heat on LOW. The point is to coax the collagen out of the bones, not evaporate away all your yummy broth!

While your broth is simmering, you can cook your vegetables. Just melt the butter in a saute pan and add all the veggies. Add a little salt and saute them on medium for several minutes. You don’t want them to brown; but you want them nice and soft. Crunchy veggies in a pot pie is a little disconcerting!

By now your broth should be done. Remove the bones (and veggies, if you added them) and let the pot sit a while in a cool place (not on the stove). This allows the fat to rise to the top so you can skim some of it off; and it also lets all the impurities and yucky bits to settle on the bottom.

Make the cream base: Carefully pour 2 cups of broth/stock out of your stockpot into a measuring cup. Store the rest for a later use.

Next, melt the butter in a saucepan over medium heat, then stir in the flour. This will create a crumbly mass. Turn off the heat and add the stock, followed by the milk. Whisk thoroughly, to get rid of any lumps. Make sure you’re careful to reach into the corners of your pan, so that all the flour is incorporated. Turn the heat back on and simmer for a couple minutes. Cooking the mixture is what thickens it, so you’re done when it’s nice and thick, like pudding.

Taste and adjust. It probably wants a bit of pepper, maybe a little lemon juice, probably some more salt. Joy of Cooking calls for a bit of freshly grated nutmeg. I used about a 1/4 teaspoon, maybe a bit more. Nice!

Shred your chicken meat (only use half of what came off your chicken) and add it to the cream base, along with your sauteed vegetables, boiled potatoes, peas and parlsey. Taste it again. More salt?

Pour as much as will fit into a 9″ pie plate. Don’t overfill it, to allow for bubbling of the filling. You’ll have a lot leftover. It freezes wonderfully to make another whole pie later; it’s also delicious by itself, without the crust.

Top with either a Pillsbury pie crust or your drop biscuits.

Cook at 400° for 25-30 minutes, or until your crust is done. (not a bad idea to put either a cookie sheet or tin foil underneath, to catch any overflow spills.