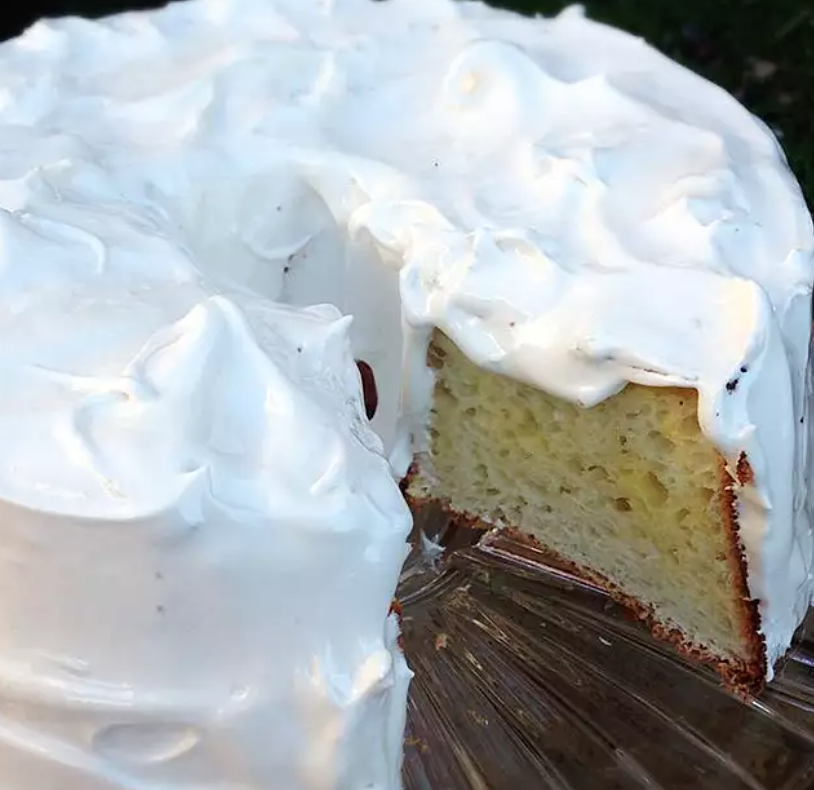 I was asked to bring dessert to Easter dinner this year. After sending 4 choices over to Jay and the kids – lemon layer cake, strawberry pie, berry tart and something called “Easter cake” – the vote came back 3-2 for the Easter cake.

Having already made them an angel food cake for their birthday, I recognized that this recipe – calling for a whole ton of whipped egg whites – was going to be basically a sponge cake. But the recipe was weird. It wanted me to boil sugar water and beat that into the egg whites for 15 minutes. Huh???

So I googled “sponge cake” and discovered that essentially this Easter cake was what is known as a chiffon cake. Unlike angel food cake – which is basically just the beaten egg whites, sugar and flour – a chiffon cake adds back in a whole bunch of fat. Not just the egg yolks, but also some added oil for good measure. The resultant cake is described as having the lightness of an angel food cake but the richness of pound cake.

But the recipes I found were all over the place – both in terms of proportions of ingredients, as well as cooking method. So I turned to my most trusted source in a situation like this – the Cook’s Illustrated Test Kitchen.

The recipe below is essentially theirs. However I added 2 drops of Wild Orange essential oil to the yolk mixture and 1 drop of Vanilla essential oil to the tablespoon of vanilla (which also got mixed into the yolks). The orange gave a nice, if subtle, hint of a little something (if I had wanted orange flavor, I should have gone with maybe 4 drops); the Vanilla might have been a bit excessive.

I poured the finished mixture into the tube pan I’ve been borrowing from Wendy Posner, which is on the small side. All of the batter definitely wasn’t going to fit. Plus I knew that I had to leave some room at the top for the cake to rise – that’s kind of the whole point of sponge cake after all. But I didn’t know how much room to leave, and nothing on Google could tell me. (I ended up leaving about 1-1/2 inches and that was about perfect)

Anyway I poured the rest of the batter into a 9″ cake layer pan and cooked it separately. In the recipes I found that said chiffon cake was perfectly ok to cook this way, they did say that the cooking time would be less than half – about 24 minutes, compared to a full hour for the tube pan.

5 large eggs
1t cream of tartar
1-1/2c granulated sugar (divided – 2T are for the egg whites)
This makes a cake that is quite sweet. I would use a bit less sugar next time.
3/4c water
1/2c vegetable oil
1T vanilla extract
Flavoring (I used 2 drops Wild Orange essential oil; you could also use almond or orange extract)
1-1/3c cake flour (Cook’s specifies that it’s quite important not to use all-purpose flour for this cake, or it will turn out heavy and dense)
2t baking powder
1/2t salt

Prepare your pans. If you’re using a tube pan, only grease the bottom. You don’t want any oil on the sides of the pan, because the egg whites have to cling to the sides in order to rise and they can’t do that if it’s slippery.

If you’re using layer pans though, go ahead and grease those as you aren’t going to get a lot of rise and you don’t want the cake to stick.

Start by dividing your eggs. Whites go into the bowl of your stand mixer; yolks go into a smallish bowl (I used the second smallest in my set of stainless nesting bowls).

Set the bowl into the stand mixture but don’t start beating your whites yet. Measure out your cream of tartar and 2T of sugar and put them in little prep bowls beside your mixer.

Whisk water, vegetable oil and vanilla into your egg yolks. Also your 2 drops of Wild Orange essential oil, if using. Make sure the mixture is well combined. Don’t use a fork, it won’t break up the yolks well enough.

Combine the rest of your sugar – 1-1/4c + 2T – with the other dry ingredients in a large-ish bowl. I used the second to largest bowl in my nesting set. This will be the bowl that everything ultimately ends up in, so consider that as you pick out your bowl.

Whisk the yolk mixture into the dry mixture until all lumps disappear. This will take a minute or two. Your arm will get tired!

Now that your batter is ready, add the cream of tartar to your stand mixer and beat your egg whites. The Cook’s Illustrated recipe calls for beating for 2 minutes on medium-high (not the highest speed), but I found that made the egg whites too stiff. You want them to be soft, ie droopy. If they stay perfectly still when you lift out the beater, they’re too stiff.

You also need to mix in the 2T of sugar, which you want to start to do once the egg whites just begin to hold their shape. So I recommend slowly adding your sugar to the mixer while it runs at about the 1 minute and 15 second point, then beat for another minute to 90 seconds, until those soft peaks form.

Blend about 1/3 of the soft (not stiff) egg whites into your batter, to lighten it. Then add in the rest of the egg whites, more gently if you can. But don’t skimp on the mixing either. If you see lumps of egg whites in your batter, those will be pockets of cooked egg white / meringue in your finished cake – and we don’t want that!

A couple recipes suggested tapping the pan to remove air bubbles, and scraping the top with a diagonal spatula to help ensure it doesn’t crack.

Different recipes gave opposing viewpoints on whether to cool it in the pan or out of it. I ended up splitting the difference – I used a knife to loosen it from the edge, but then left it in the pan. Mistake! As soon as I ran a knife around the edge, I broke all the little air bubbles and the cake started to deflate. It still tasted fine – it wasn’t even heavy – but it didn’t look as good.

For topping, you can serve it plain, dust it with powdered sugar, or coat it in goopy sticky sweet 7-minute icing. Frankly the sight of all that icing is I think the reason the kids wanted this cake!