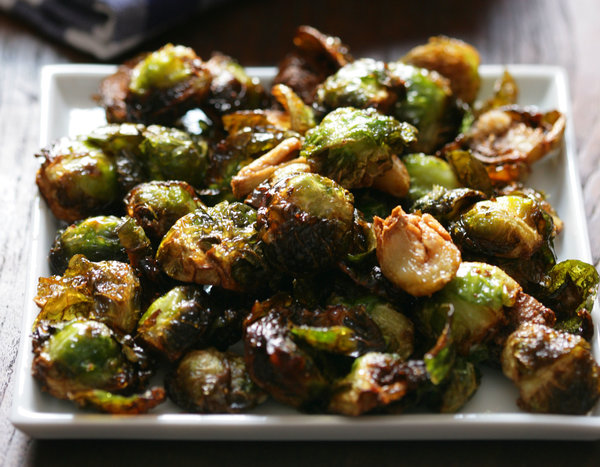 This Thanksgiving we couldn’t have salad because the e.coli outbreak meant that grocers were taking all their lettuce off their shelves. Because ’tis the season for huge brussels sprouts stalks, I decided that would be our vegetable side dish instead.

I looked through a few of my recipes and kind of ended up with a mash-up. But everybody loved it – especially Leah – so I figured I’d make a note of it here.

Cook the bacon in a pan. When it’s crisp, remove it to a paper towel to drain and add enough olive oil to the pan so the whole bottom is coated in oil.

Arrange the largest Brussels sprouts cut-side down in the pan. Once the pan is full, toss the rest (the little ones) on top as you apply heat. Allow to sit, without stirring, for several minutes so the bottoms will caramelize – but be careful to watch it so they don’t burn!

Meanwhile, slice the cloves of garlic and toss them into the pan, stirring to combine once the sprouts have browned. Add the chicken stock to the pan, cover and steam just until tender. But don’t overcook them (which means don’t let them get soft) – Brussels sprouts turn a really nasty flavor when they’re overcooked.

If there’s leftover broth in the pan, turn up the heat to high for 20 seconds or so to let it evaporate off.

Crumble the bacon and sprinkle on top and serve!