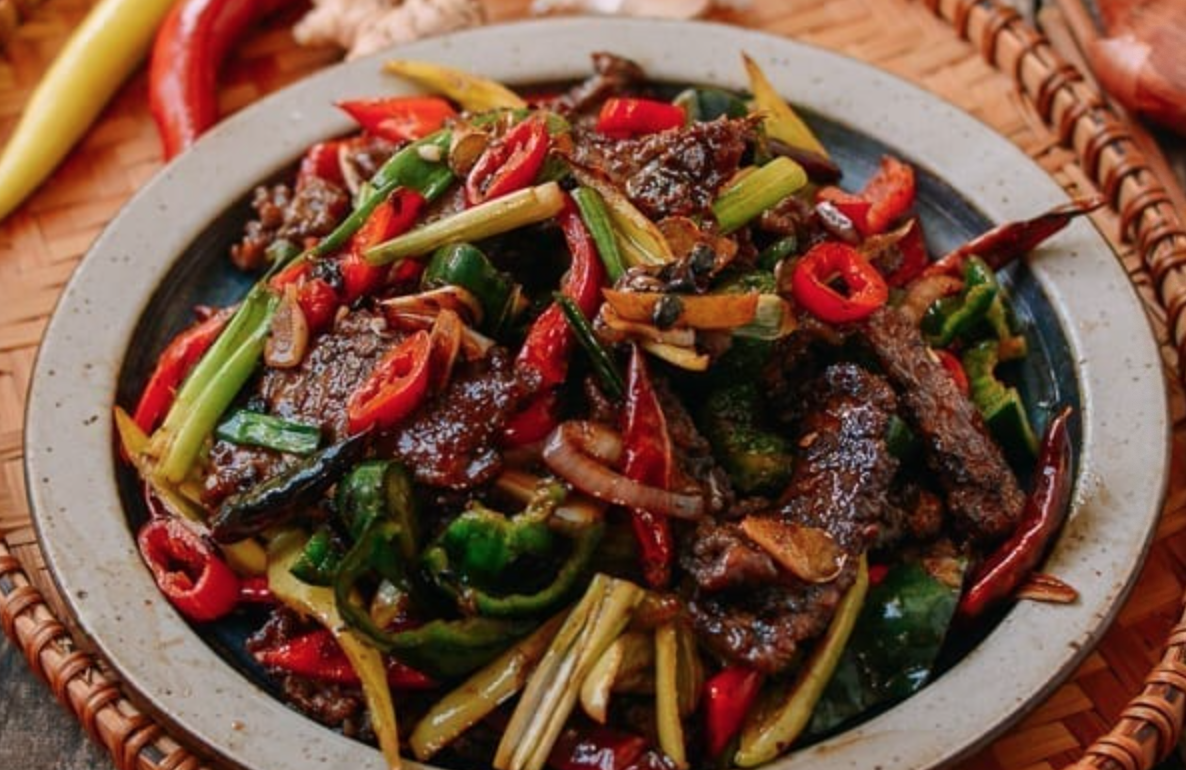 Here’s another one of the recipes I’ve been trying from the terrific website, TheWoksOfLife.com. The best part of this dish was the cooking technique for the beef: incredibly flavorful, light and crispy and – much to my surprise since it was made with a relatively tough cut, the flank steak – extremely melt in the mouth tender.

[Their article about how to make stir-fry attributes that tenderness to the water in the marinade – who knew?!]

My first try resulted in a dish that was a bit … pungent for my taste. But I realized that the recipe had called for me to rinse my fermented black beans, which I didn’t do; and also that I had made my dish with only used green pepper, because that’s all I had. It started to occur to me that maybe the variety of peppers would add more to the dish than simply some heat??

So the following night I did a second batch, but without any meat this time (I had only bought the one steak). For the peppers I used one poblano, one red pepper, one jalapeno and one red finger pepper. I carefully removed all the seeds and ribs from all of them, and honestly my finished combo was hardly spicy at all! But when I stirred them into the leftovers from the previous night – WOW did it improve the flavor!!

Combine water, corn starch and oyster sauce; massage it with your hands into the meat strips so that all the water is absorbed by the meat. Marinate for 30 minutes. Just before you’re ready to cook, toss the meat in the cornstarch.

HIGH HEAT:
Pour 2T of oil into your “wok” (I used my extra-large stainless-steel pan, and it seems to work pretty well) and sear the beef in 3 batches. Push the cooked pieces to the side of the pan before removing, to let some of the oil drain off. Scrape the brown bits off the bottom and remove them before continuing.

MEDIUM HEAT:
Fry the ginger for about 30 seconds. (You want about 2T of oil in your pan – add some if there’s not enough left from the meat)
Add the shallots for another 30 seconds.

HIGH HEAT:
Add the bell peppers – the high heat is so they get a nice sear on them.
Pour the wine around the perimeter, add the garlic & black beans for 30-60 seconds.
Return the beef to the pan, add the sauce and the scallions and fry everything for 20 seconds, or until all the sauce has evaporated.