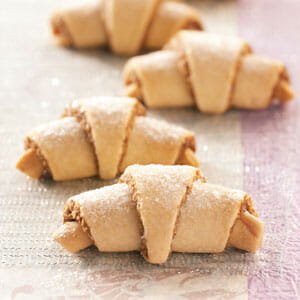 These yummy little cookies have a very unique flavor, thanks to the sour cream in the dough. They’re also a different texture than most of our cookies, thanks to the yeast. It makes them almost more like a little mini pastry than a cookie. So naturally they’re prepared with a different method too – rolled out on a pastry board and cut, rather than individually shaped.

They’re similar to Jewish rugelach; but that treat has to have cinnamon, whereas these are just flavored with nuts.

Because they call for egg whites, it’s good to make them on the same day as English Toffee Bars, which call for egg yolks.

Combine flour and yeast. Cut in* the cold butter until extremely fine and crumbly.

* The easiest way to cut butter into flour is with a food processor. Second easiest is with a hand pastry blender. If you don’t have either of these two tools, you can also do it with two knives. Because you’ll have a knife in each hand, you have to keep the bowl still by putting a dish towel between it and the counter.

Shape the dough into 4-5 balls. Using powdered sugar to “flour” your rolling surface, hands and rolling pin, roll out a ball of dough as thin as you can possibly get it. However you don’t want the resulting circle of dough to be more than about 10″ in diameter – otherwise the cookies will be too chubby once you roll them. Cut the circle of dough into 12 wedges. (you don’t want to cut it after adding the egg white and pecans, it’s too messy).

Roll up each wedge like a crescent roll, being careful not to roll too tightly or the filling will squirt out.

Place cookies on a greased cookie sheet point side down, bending the ends as much as possible so they look like horns (they should have much more bend to them than just a crescent shape). They don’t spread out much in baking, so you can put them close if you need to.