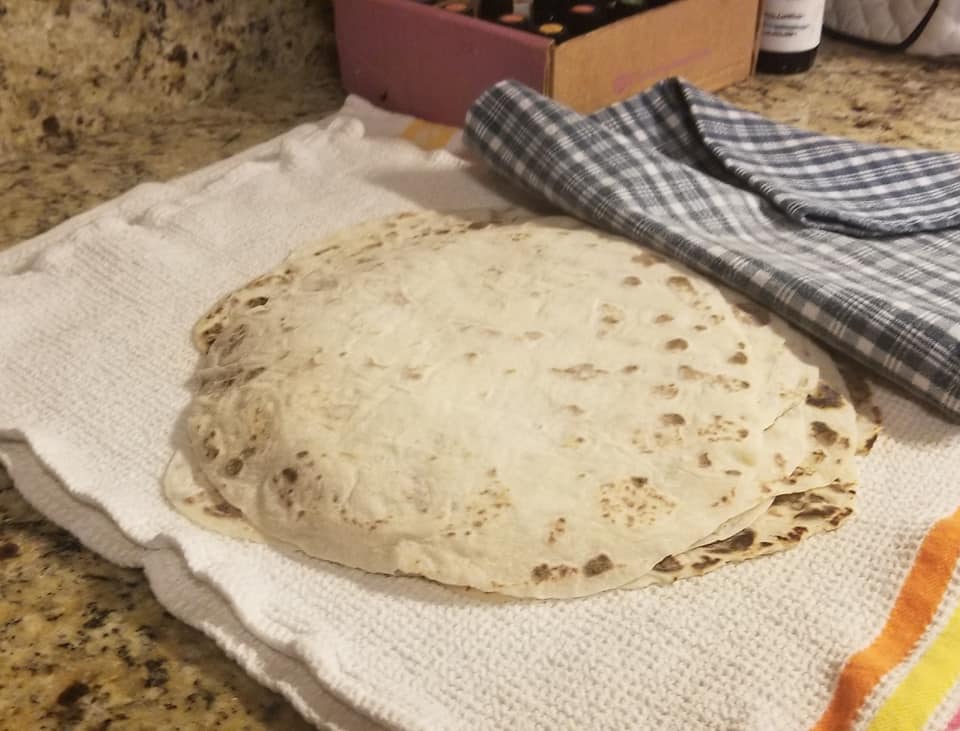 This dish is well-known to any Scandinavian, and it’s always a favorite if you go to a Swedish Christmas festival. And with good reason! It’s a soft, toothy tortilla slathered with butter and sugar – and there’s nothing bad about that!

When I was a kid, my mom always served it along with meatballs and mashed potatoes for Christmas Eve dinner. When Grandpa Kerm was alive, that meal was served – along with lutefisk – on the 23rd to celebrate his birthday, and they called it Little Christmas.

The secret is in the kind of potatoes you use – make sure to use Idaho bakers (russets), not red potatoes or even Yukon golds. You need a potato with a high starch content, otherwise your mixture will be gluey and unmanageable. You know you’ve got what you want after they’ve boiled, if they’re kind of crumbling apart.

It’s also best to use a ricer to “mash” the potatoes – but if you don’t have this particular kitchen tool, a big fork will do. Just make sure you don’t leave any lumps bigger than tapioca pearls.

This recipe should make about 20 sheets of lefse.

Boil the potatoes in salted water. Rice or mash them, making sure there aren’t any big lumps left, then add melted butter and milk or cream. Refrigerate for several hours or overnight to cool completely. Add the flour and mix with your hands. If you try to do it in a KitchenAid you’ll get a gluey mess. 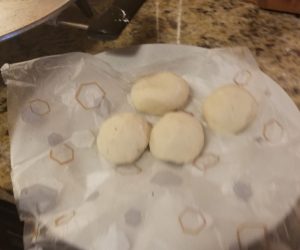 Pinch off pieces of dough about the size of a lime and roll them into balls, then set it on a plate.

Once you’ve got about a dozen balls made, put the rest of the dough back in the fridge while you start baking.

Watch the video below for a tutorial from me and Tanis about how to roll and bake your lefse.

To make the lefse, roll out your first ball on a well-floured surface. I always use a regular, smooth rolling pin and a well-floured countertop. But if you want to get fancy you can buy a special rolling pin that puts little hash marks on the dough, that become visible after baking (which we demonstrated in the video).

However you do it, make sure you liberally flour both your surface and

your rolling pin, and re-flour after each sheet you roll out.

When the circle of lefse is nice and thin – you want them pretty much as thin as possible – use your lefse stick to carefully lift it and transfer it onto the hot baker. (see the video for a demonstration).

Cook each lefse one at a time on a hot (425-450°), flat griddle. Flip with your lefse stick (or a long flat frosting spatula) when small bubbles appear, about 60 seconds per side.

A perfectly cooked lefse will have nice brown spots all over it and the dough in between will no longer have the wetness of the raw dough.

If they don’t seem to be cooking all the way through, turn the heat down a bit so you can keep it on the pan longer, without burning it.

When your first lefse is done, use the lefse stick again to lift it onto a clean, thick dish towel and cover it with another dish towel. As each new lefse comes off the baker, stack it on top of the previous one and cover it again with the dish towel. This keeps them warm and also prevents them from drying out.

Allow them to cool completely, and then wrap tightly in plastic so they don’t dry out and get hard. It’s hard to get them soft again, and if they’re not soft they’re not nearly as yummy.

To serve, spread each sheet with butter and then add your sweetener of choice. I say anything but white sugar is sacrilege; but apparently brown sugar is common – and Grandpa Kerm liked corn syrup on his!! Blech!

Lefse freezes extremely well. Either butter and sugar it, then roll up for serving and freeze those; or make a stack of flat lefse with waxed paper between the sheets. When it’s time to serve, allow it to thaw, remove the wax paper, then re-stack them and wrap them tightly in foil. Warm the stack in the oven to soften.