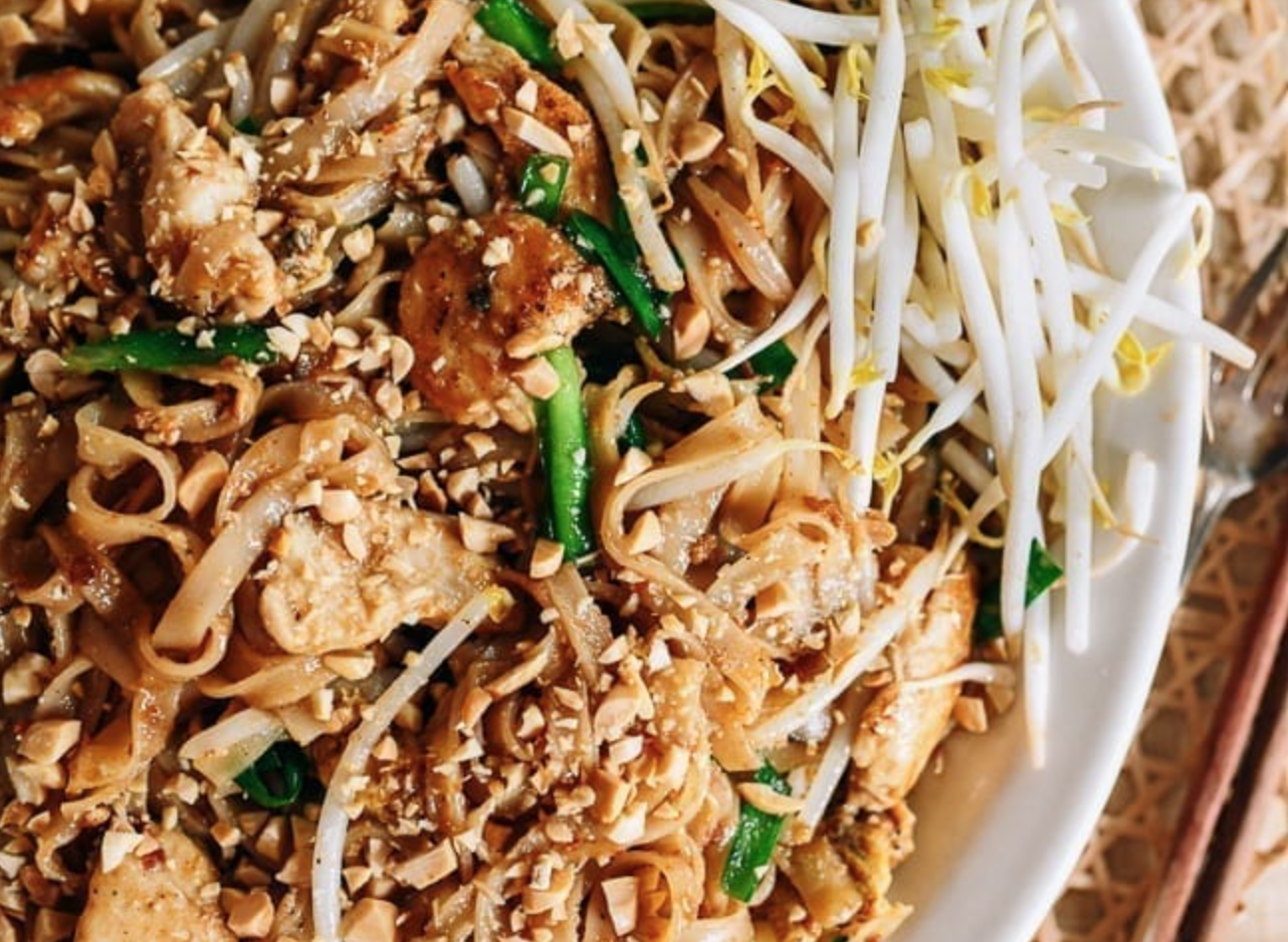 I’ve been on a Chinese food kick lately, mostly working off recipes on the Woks of Life website, which was recommended to me by Theresa Mah. Their pad thai proclaimed to have “authentic” flavor, so I made it as directed, including the dried shrimp. As soon as I dumped the stuff in the pan though, I knew it was a mistake. My nose was assaulted with that fishy smell that a westerner like me finds so nauseating, and which ruins many an otherwise tasty Chinese dish.

I ate most of it (I am a frugal girl after all!); but then promptly made a second batch, sans dried shrimp powder. Much better!! The second batch also took a lot less time. There’s a lot to be said for being familiar with a recipe!

So here are my Americanized directions.

Note: I still don’t own a wok, so I used my extra-large stainless steel saute pan. With 14 oz of rice noodles and almost 3 cups of bean sprouts, it was about the maximum the pan could handle!!

Note: Part of the reason I made such a big batch is because 2 key ingredients – mung bean sprouts and garlic chives – come from Weeee! (the Asian grocery delivery app) in huge quantities. Again, frugal girl. Since I won’t use them in anything else, and I certainly don’t want to waste them, the only solution is an extra-large batch of pad thai!

FOR THE REST OF THE DISH:
14 oz pad thai rice noodles
3 cloves garlic, minced
1 smallish red onion, sliced
4 large eggs, beaten
3c mung bean sprouts (I’ve concluded you almost can’t use too many bean sprouts. They blend right in with the rice noodles, and they really lighten the dish)
1-2 c Chinese garlic chives (see note below on preparation)
If you absolutely cannot get garlic chives, green onions make a substitute, albeit a poor one
3T roasted peanuts, chopped, for garnish
4-1/2 T vegetable oil + 1/2 T sesame oil – measured into a small jar, with the tablespoon inside of it for easy measuring later
jalapeno slices (optional garnish)
lime wedges (optional garnish)

Mix all your sauce ingredients in a jar and shake. Set aside.

Mix all your chicken ingredients in a bowl and stir together with your fingers. Allow to marinate for 20 minutes while you get everything else ready. (This preparation method is what gives Chinese chicken that velvety texture, btw).

Boil the rice noodles and drain them well in cold water. Set in a colander. If they start to stick to each other, you can run them through cold water again before you stir fry. Do NOT dump a big gluey pile of noodles into your pan and expect to be able to stir them!! LOL

Prep all the rest of your ingredients and have them ready to go in small bowls. With stir fry, you can’t be screwing around trying to chop something once the cooking has started! Line them up on your counter in the order they go into the pan: garlic, red onion, noodles + sauce, eggs, sprouts + chives.

Heat your pan using close to the highest heat it will go. (this isn’t something you can do with anything other than a wok or stainless steel pan). Swirl 2T of your oil mixture around the pan, then add the chicken in as close to a single layer as you can get. Let the chicken pieces cook for a minute or so without stirring, after which time they will easily loosen from the bottom of the pan. Then you can stir them around a bit; but try not to let them touch the sides of the pan – they will stick and make a mess. Remove the chicken to a dish.

Add 3T of oil to the pan and turn the heat down to medium. Stir fry the garlic for 30 seconds, then the red onion for another 30-60 seconds.

Add the noodles (spread them around as much as you can, to make it easier to stir everything together) and top with the sauce. Stir for a minute or two, just until it’s all combined.

Shove the noodles over to one side of the pan, add the last of your oil to the empty half, and dump in your eggs. Let them cook for a minute or two, stirring a little, then you can stir them into the noodles. The hot noodles will cook them the rest of the way.

Add the chives and bean sprouts and stir until they’re fully combined and have begun to wilt, 2 minutes or so.

Remove to a serving plate and top with chopped peanuts. Add a couple jalapeno slices or wedges of lime if you want for garnish and added flavor.