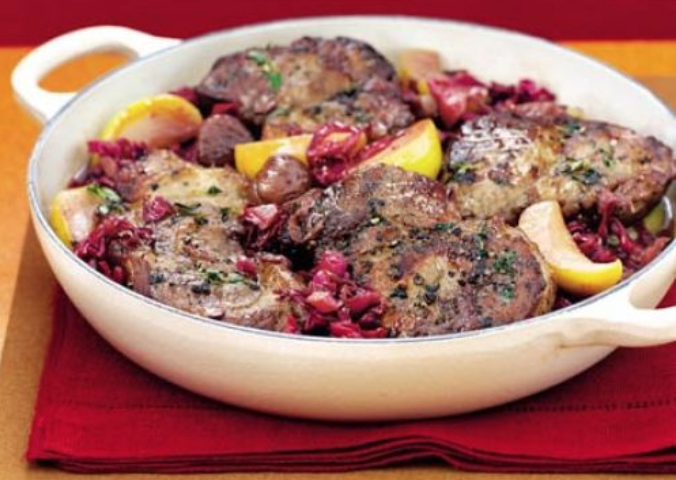 I had a head of red cabbage sitting in the fridge that needed using up. Unfortunately, this recipe only used a quarter of it. But it was pretty darn tasty, so I might make it again!

The original recipe called for 2 T of cranberry or redcurrant jelly. I didn’t have either of those so I skipped it. But something like that added to the sauce might have been nice.

I used a dutch oven to saute the vegetables and finish the dish; while I used a saute pan to cook the pork. You can’t do the pork in the dutch oven because you need a larger flat surface for all the meat to brown. I suppose I could have finished the whole thing in the saute pan …

Combine the flour and spices and dust the pork with the mixture. Saute the pork in the oil over medium heat for a few minutes until browned.

Saute the onions for a few minutes until lightly caramelized. Add the cabbage and apples and stir for a bit to cook. Add the wine and browned pork, bring to a boil and reduce heat to simmer. Cook for about 30 minutes on the stovetop on low (or in the oven), just until the pork is tender.