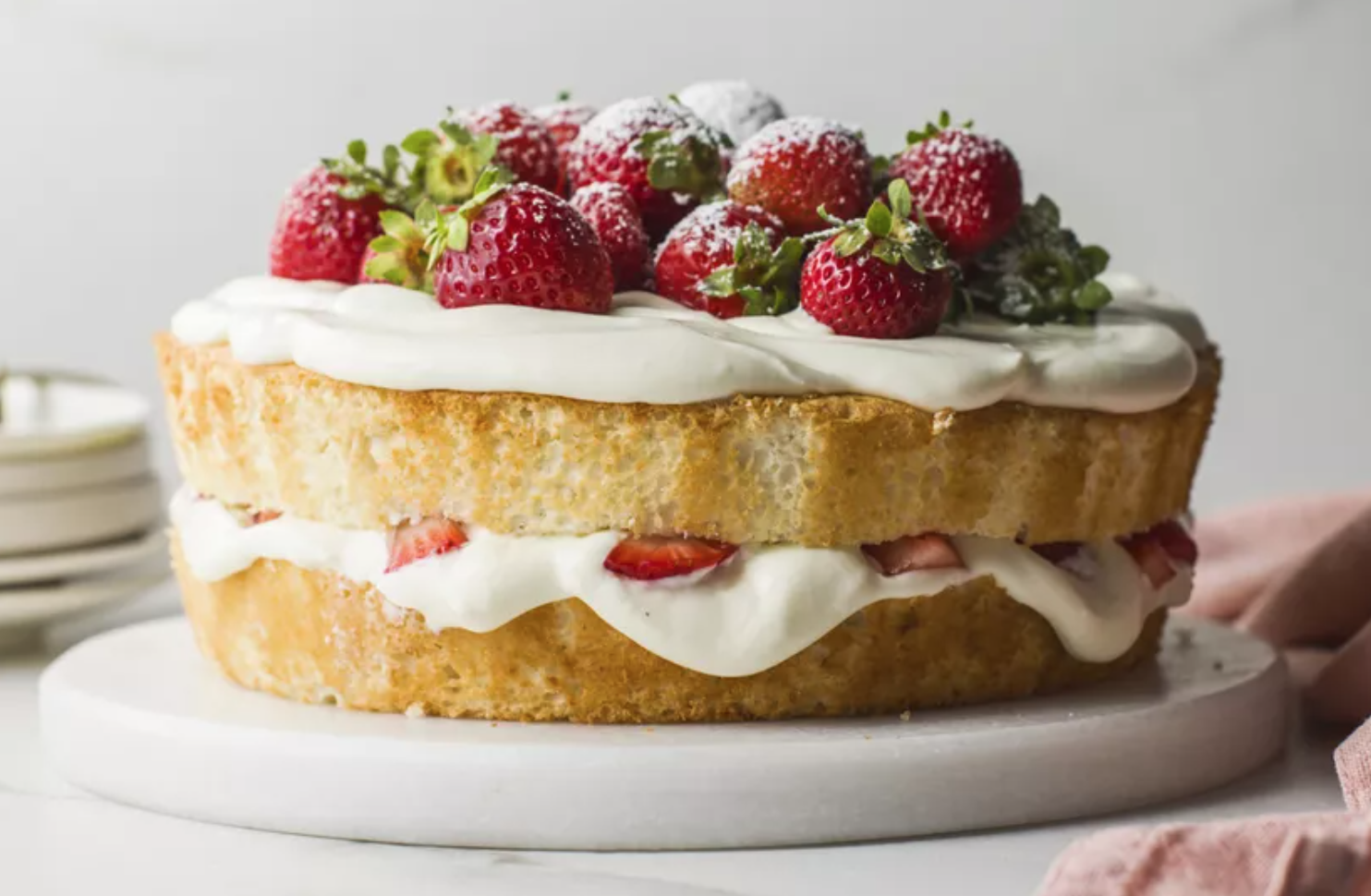 I had volunteered to make the kids’ birthday cake and asked them what kind they wanted. I was really surprised that they both wanted angel food cake!! (I mean, who actually likes angel food cake??)

It turns out that this is a fussy, pain in the ass cake to make – even though it’s so simple, unimpressive and dare I say not too terribly delicious when it’s finished.

Part of the fussiness / difficulty is that the main ingredient is egg whites. Twelve of them. Who’s got the time to separate 12 eggs? And even more to the point, what do you do with 12 leftover yolks?? So I decided the sensible route was to buy a carton of 100% cage free egg whites from Trader Joe’s.

Turns out, these suckers don’t beat up the same as regular separated-from-a-yolk egg whites. My first batch (yes, I made TWO batches!) never progressed beyond the stage of being thick foam and I had to throw it out.

For my second batch, I did several Google searches on “how to beat egg whites” and “why won’t my liquid egg whites form stiff peaks.” At least half the commenters claimed that their liquid egg whites formed peaks just fine with no special modifications. (It makes me suspicious that these people wouldn’t know a stiff peak if it hit them on the nose).

But going on the hunch that my watery egg whites were caused by the full 2 teaspoons of flavoring extract in them, I decided to try beating the egg whites with just the cream of tartar. That worked somewhat better, and I was able to add the extracts once my semi-peaks had formed.

I think the real secret is that you’re supposed to start by beating the egg whites all by themselves on low speed to create some foam. Then you turn it up to medium while you add your mixture of cream of tartar, sugar and salt. Once you’ve got your soft peaks, then you add in your flavorings.

But I didn’t learn any of that until after my second batch had already been on high speed for 2 minutes. Reducing it to medium did seem to help, but they never even achieved peaks I would call “soft”; they were just barely past soupy. Which is why I’m so utterly surprised that my cake rose a full inch over the rim of the baking pan! So tall in fact that the top was almost touching the top of my toaster oven so it burned.

Anyway, while my cake was in the oven I found this recipe from Sally’s Baking Addiction (one of my most trustworthy sources), and she notes at the bottom that it’s adapted from Cook’s Illustrated, the most authoritative test kitchen around, as far as I’m concerned.

So if you’re gonna dick around with angel food cake (and really, why bother?), I’d just advise you follow her recipe! Although the recipe that I followed from Spruce Eats called for 1/2 teaspoon almond extract, and I do think that added a nice touch. It also called for just 3/4c flour, whereas most of the others I saw called for a full cup – and my cake was really nice and moist, so maybe less flour is better??

PS the cake shown in my picture has a filling/frosting made with 1/3c sweetened condensed milk whipped together with 2 packages cream cheese, then folded into a thawed tub of Cool Whip. There’s 1 cup of chopped strawberries between the layers too.