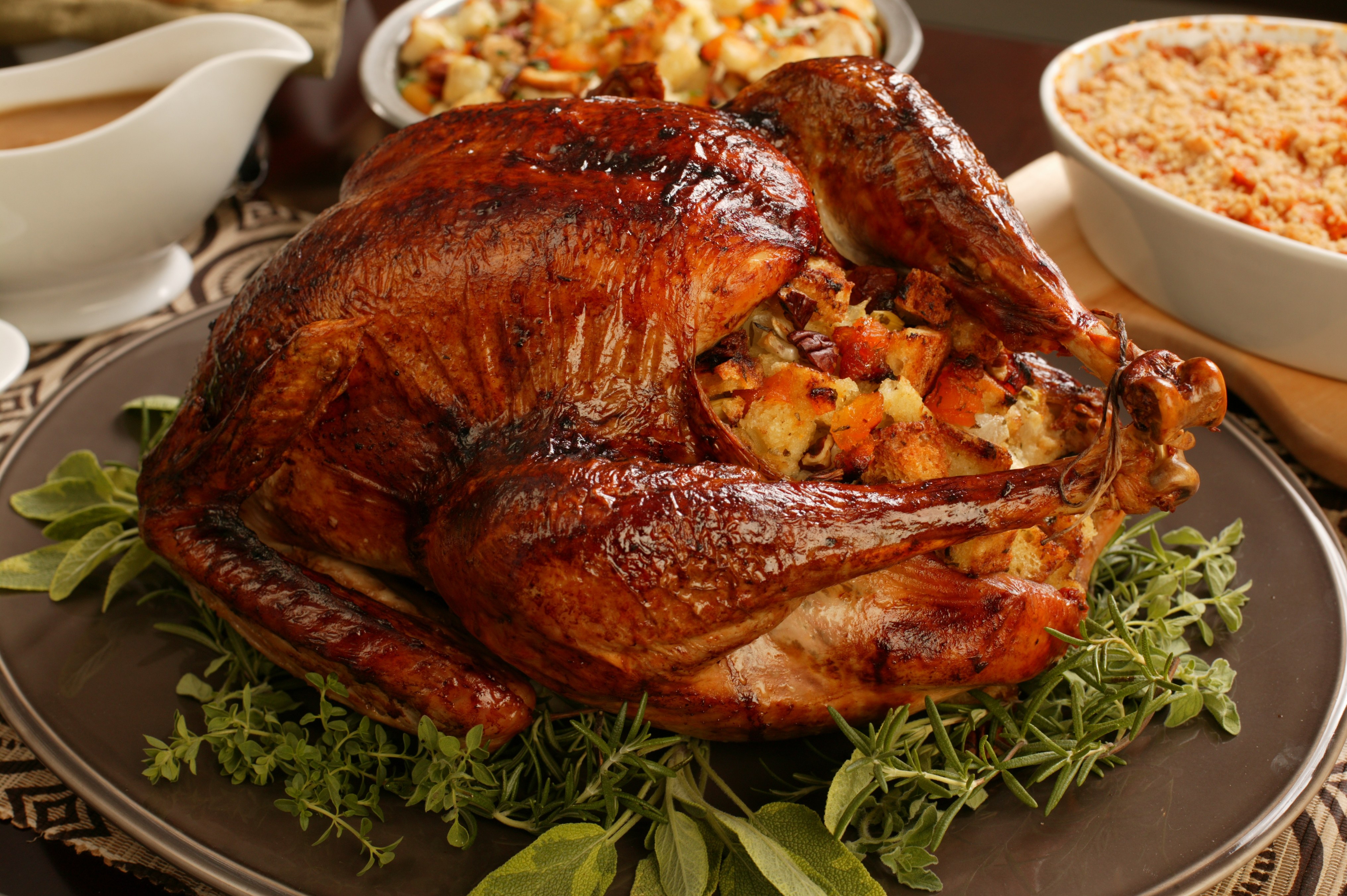 I went to a big potluck Thanksgiving with friends this year and on the sign-up sheet, I volunteered to bring the turkey. People were so impressed and amazed, like turkey’s such a big deal! I guess people do see making a turkey as a big, difficult, easy-to-mess-up thing; but in reality it’s one of the easier main dishes to make. I think the trick is to just keep it simple. No deep fryers for this girl!

See the bottom of this post for some of the most common cooking “tips,” and why I don’t advocate them.

If you want to add a little crunch, toasted pecans are good.
For sweetness, add some chopped apple or raisins.

* This is the kind of stuffing my mom always got and as a kid, I always loved it. But the truth is that I haven’t enjoyed stuffing nearly as much the last few years as I always used to. It tastes overly-processed to me (which, of course, it is). So this next year I’m going to try making my own stuffing from scratch, possibly using this super-simple recipe – wish me luck! 🙂

Thawing the bird
If you buy your turkey frozen, it can take several days to thaw in the fridge – so make sure to buy it no later than Monday!

(You don’t want to thaw it on the counter, because it will take long enough that bacteria and whatever could start to grow. If you simply must thaw it quickly, running it under room temperature water is your best bet).

Make the stuffing
Chop the veggies and saute in the butter until softened but not browned. Add the broth and heat it to about 125 degrees, which is cool enough you can stuff the bird without burning your fingers!

Pour the broth and veggie mixture over the stuffing and stir, then wait a few minutes for the stuffing to soften. While you’re waiting, season the turkey skin well with salt and white pepper (black pepper makes the skin look funky when it’s cooked) and rub it in. You can also spread the skin with some butter, but that’s not really necessary – there’s plenty of fat from the turkey itself!

To stuff the bird:

Make sure you remove the neck and bag of giblets! I think these parts are disgusting so I throw them away. Some people like to boil them and add them to the gravy.

Stuff as much stuffing as you possibly can into the stomach and neck cavities. This makes for nice dense stuffing, which I like. 🙂 Put the rest into a casserole pan and add some extra broth, then cover it with foil. It won’t be as yummy as the stuffing in the bird (see note below), but what are you gonna do?

Preheat the oven to 325 degrees. Take out the top rack and move the bottom rack to the lowest position.

Put the bird into your roasting pan and fold the wings underneath. This protects them from burning and also stabilizes the turkey when you go to carve it later.

During cooking the only thing you have to do is baste it every 30 minutes or so, to keep the skin tasty and crisp. When the turkey is getting close to done, you might want to put tin foil loosely over the breast and/or the drumsticks to keep them from burning.

Turkey takes 13 minutes per pound to cook – slightly longer when it’s stuffed. So an 18.5 pound turkey will take 4 hours, plus a little longer because of the stuffing. Most turkeys nowadays come with a little thermometer already stuck in the thigh; when it pops up, your turkey is done!

Let it rest for 15 minutes before carving.

The turkey drippings form the basis of your gravy. To get the drippings, you can either remove the turkey to a carving board and cook the gravy in the roasting pan; or, you can use the baster to suck the drippings out of the pan.

Either way, let the drippings sit so the fat rises to the top. Then stir a little bit of flour into water to remove the lumps, then stir into the drippings. Boil it until it thickens.

If you’re doing like I did and bringing the turkey to a potluck, you’ll need to keep it warm in transit. I found that a big cooler works great! However, it also keeps the turkey cooking, so you want to take it out of the oven just a BIT underdone.

Flip the bird halfway through cooking time: This is supposed to keep the breast more moist, but I dare you to try and flip 20 pounds of hot juicy poultry without it falling on the floor!

Brining the bird: Cook’s Illustrated swears that brining the turkey makes it significantly more moist; but it also makes an excessively salty bird, in my opinion. Plus like all these others – it’s just not necessary. The breast won’t dry out if you don’t overcook it.

Cooking the stuffing in a casserole dish, rather than the turkey. Someone somewhere once undercooked their turkey and got sick on the stuffing – and now everybody is all up in arms about it. All I know is that my mom stuffed probably 35 turkeys during my lifetime, and no one ever got sick once. Plus my grandmother stuffed another countless number of turkeys before I ever came along, again with no issues. So I say it’s an unnecessary precaution, and one that makes less-delicious stuffing.