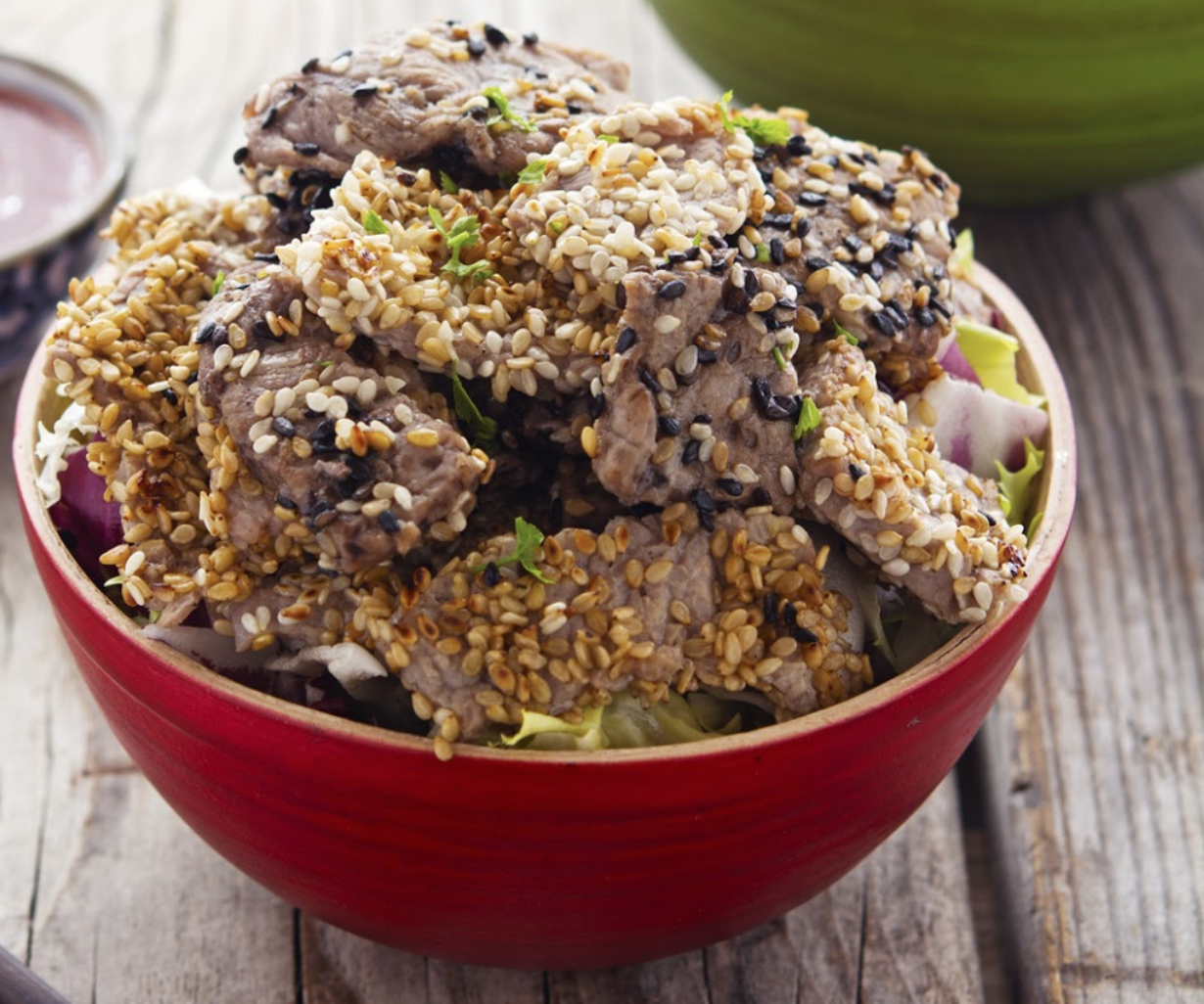 This is a really simple and delicious way to prepare beef that can easily be thrown onto a salad or stir fry or on top of a bibimbap to pack a protein whollop into your meal.

For the record, the picture shown here is the one from the food blogger from whom I got this recipe (who in turn got it from one of Charles Phan’s cookbooks). In my version, I didn’t get nearly that many of the sesame seeds to stick to the meat.

The key to making the meat simply melt-in-you-mouth tender is in how you slice it. And this is something I learned from my mom, who had an awesome recipe for flank steak. Using a large slicing knife, cut across the grain. This basically severs all the tough fibers that run through the muscle, transforming the tough flank into a succulent bite.

1 lb flank steak (you can substitute hanger steak or possibly strip steak – definitely don’t use anything from the loin)
2t fresh grated ginger
2 garlic cloves, minced
2 T fish sauce – if you don’t have any, you can substitute soy sauce; but it won’t be anywhere near as yummy, to say nothing of less authentic
1T vegetable oil
1/2c sesame seeds – that’s an entire jar from the spice aisle!

Combine all the marinade ingredients in a bowl.

Slice your steak. Make sure you cut across the grain, and slightly on a diagonal as well. Make your slices a bit less than 1/2″ thick, but definitely more than 1/4″. Cut each slice crosswise, such that it’s no more than about 2-1/2″ long.

Stir the cut steak pieces into the marinade and refrigerate for at least 20 minutes, but an hour or two is better. Just before you’re ready to cook, stir in the sesame seeds.

Heat a skillet over medium-high heat and using a fork, place the pieces carefully one a time on the hot pan (no oil). Don’t just throw them in because the moment the meat hits the hot metal, it will stick. If they’re twisted instead of flat, they won’t cook right and will be hard to flip.

As soon as you’re done filling your pan, the first pieces will be ready to flip with your fork. Try to flip them in more or less the same order you put them into the pan.

As soon as you’re done flipping them all, the first ones will be ready to come out. But turn off the heat before you remove the meat, because the marinade will be starting to burn. Once all the meat is out, scrape all the burnt bits out, even deglazing it with some water if necessary. This is a nuisance, but don’t skip it. The marinade from the first batch will really burn – and not only will it set off your smoke detector, it will taint the second batch. 🙁